In order to accurately model the relative differences in capability, Capacity Planner uses a concept of 'Benchmark Scores'.  Normally, this is using specint rate scores for each chipset used in the environment.  Capacity Planner then normalises cpu utilisation on each machine to 'specints'.  This is the equivalent utilisation expressed as a function of the chipsets benchmark score.  To draw the sunburst accurately, the sunburst must have a 'reference' machine from which to pin all sizing to.  It does this by automatically selecting the most common device type across the estate.  Each machine CPU capacity in specints is compared and drawn relative to that benchmark reference server.

When viewing CPU utilisation at a level in the sunburst higher than a host, for example, a cluster, data center or application/service, then that CPU is expressed relative to the benchmark reference server.  That is, the CPU demand in GHz shown is what that CPU would be as viewed from the benchmark reference.  This allows a consistent measure of CPU to be used across the board when aggregating CPU values from various hardware platforms. 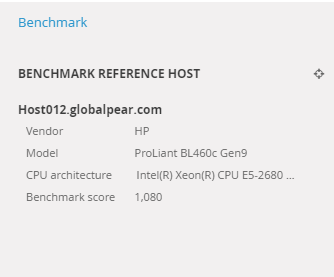